"As a traditionalist, Nick ranks amongst a handful of truly gifted rock photographers…Bob Gruen, Steve Gullick, Mick Rock, Henry Diltz, Jenny Lens and Anton Corbijn come to mind - all original in their own ways, but each with a keen awareness that in addition to natural born talent, in order to stand above average, to be noticed, to be great, to be an ‘artist’ as opposed to a ‘craftsman,’ there is one essential quality that will always separate the ordinary from the extraordinary....Passion." - Gina Higgins, American Noir

"As a fellow photographer I am more than a little jealous of Nick's work. His images capture the atmosphere of many, many magic moments.” - Mike Harding

"Nick's book of photographs captures some of these memories and brings them to life once more. I am honoured to be included in such a brilliant line-up. Thanks Nick." - Richard Hawley

"To work with Nick has been an absolute pleasure and he brings a total visual concept and imagery sympathetic to his subject matter with an ease and understanding second to none. He has an eye for detail I have never experienced before and is articulate and professional every step of the way, turning a vision into a reality. His live work is simply stunning and I am proud to have been on the other side of his camera. If there's a secret…it belongs to Nick!" - Sandy Newman

"It was great to work with Nick – the photo session was totally relaxed but 100% professional and resulted in shots that couldn't have been better. Thanks Nick – I'll get the pepsi max on ice next time!" - Kerry Harvey-Piper

"I wanted some special guests in my Christmas music video in aid of Cancer research UK, and they dont come more special than my close friend and top rock photographer Nick Elliott. Always a joy to work with and great to have around the set, Nicks personality shines. Thanks Nick - a great compliment to me that you are in my videos." - Gary Curtis

"Nick's talent is in capturing a unique moment in every artist's performance that takes you to the very place their music belongs. I was surprised he managed to capture a rare moment when my eyes were open while I was singing. Very few have done the same so well." - Cara Dillon

"Nick's photographs capture a festival performance feeling which is so hard to put into words; it's something primal, a feeling fuelled by adrenaline and fear and the way the crowd spurs you on. It's an honour to be included in his collection." - Bella Hardy

"Nick's book of photographs captures some of these memories and brings them to life once more. I am honoured to be included in such a brilliant line-up. Thanks Nick." - Sharon Shannon

“This image instantly catapults me back to my younger days at Cambridge Folk Festival. It brings back fond memories and I like the happy vibe that Nick has managed to capture here. It's an honour to be included. Mo thaing dhut Nick. x” - Julie Fowlis

“It's always a pleasure to have Nick at one of our events, knowing full well that no matter where the lens is pointed, it's bound to result in yet another masterpiece!” - Dave Allen

"You want the job done properly? You want the magic ingredient? You want a man with vision? You want someone who can walk the walk? ....You want Nick Elliott!" - Mick Gallagher

"Nick Elliott is an extraordinary photographer. His images speak for themselves and are a perfect complement to the music and artistes they capture." - Mark Smith

"Nick can't half take a decent pic...we soon invited him back to the Corn Exchange to snap Def Leppard. To use some of his own cockney talk - he's a diamond geezer...who takes a mean photo!" - Neil Jones 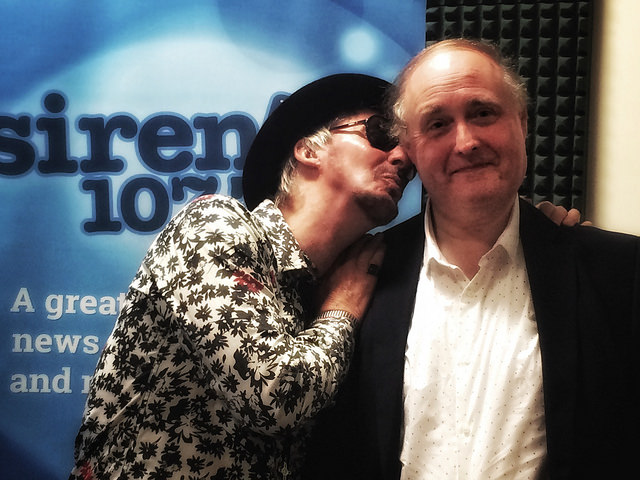 "Sound and Nick's Vision is more than a radio show. More than a podcast. More than a journey into the musical inspiration of one of the nation's premier photographers. Quite simply it’s an audio driven, life-changing, musically fulfilling, pot-pourri of perfection!" - Alex Anthony-Lewczuk, Founder Siren 107.3FM

"We've thoroughly enjoyed having Nick Elliott as a guest on Endeavour. There aren't many people with stories of having been there, done that, worn the t-shirt - or in this case taken the photo! We always strive to create the best output we possibly can and work with people to that end goal. Often it gels together at both ends and becomes something far greater than you could've imagined. This was one of those occasions. We can't wait to work with Nick and his team again in the future." - Dylan Taylor, Director/Station Manager, Endeavour Radio FM

"Talking to nick is an immersion into pure liquid gold audio. his tales and anecdotes illuminate the rock genre with a fresh and vivid perspective, warts n all" - Chris Moore, Rock Show Presenter